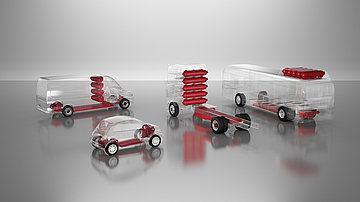 Aachen, Germany, July 2020 – The fuel cell technology as an emission-free energy source is back in the public focus. Following for instance Japan and South Korea, now Germany’s government has emphasized hydrogen’s importance as a "green" substitute for fossil fuels. FEV, a globally leading development service provider with company HQs in Aachen, Germany, supports technological openness in future mobility solutions and looks back on more than two decades of experience in the field of fuel cell development.

The expansion of e-mobility is seen as an important step towards meeting the climate targets set. "However, when selecting the technology, we must always consider the respective application," said Professor Stefan Pischinger, CEO of FEV Group. "So, the perception of the fuel cell as a sustainable drive system with high potential is absolutely right and important for many applications".

In June, FEV Consulting published a study for the VDMA – a European network association in the mechanical and plant engineering sector – carving out the following scenario: In the year 2040 eleven billion Euro turnover will be generated by fuel cell components for passenger cars in Europe, globally even 75 billion. According to the study, initial demand will come from Japan and South Korea due to both nations’ clear commitment for this technology. China, the US and Europe will follow with only minor delay. For 2040, FEV expects a volume of approximately ten million vehicles annually, representing a market share of twelve percent in these markets. In the heavy-duty sector, this figure will be significantly higher.

Fuel cell advantages in the powertrain field – such as low system weight, high range of a tank filling and the short duration of refueling – are well known. This makes them predestined for applications with long distances to be covered where heavy batteries would no longer be practical, e.g. in commercial vehicles, trucks, buses, large passenger cars or even trains and shipping traffic. Despite the known advantages, the field of hydrogen fuel cell development is still relatively young and only a few development and test procedures have been established so far.

FEV plays a pioneering role in this field and can look back on more than twenty years of experience in this field and a large number of successfully completed large-scale projects – from the development of fuel cell solutions for small cars, commercial vehicles and trains. The development of individual cells, stacks and systems is also part of the company's extensive range of services. FEV's high level of expertise in the development of conventional powertrains can also be used to develop fuel cells. For this purpose, a modern test center is available in combination with established, computer-aided methods and processes. "Our customers particularly appreciate the fact that they receive our development services completely from a single source," said Professor Pischinger.

This includes development and design, construction, vehicle integration, commissioning, and calibration, testing of components and complete fuel cell systems. In addition, the development service provider operates six dedicated fuel cell test rigs at the "Center for Mobile Propulsion" in Aachen, which can be used to test fuel cell systems with a system output of up to 300 kW in a standardized process. In addition, a flexible test stand is available for testing fuel cell stacks up to 50 kW and auxiliary units for fuel cell systems. Ambient conditions can be realized from -40 °C to +120 °C and a relative humidity of 10 to 98 percent.

These test benches were developed completely in-house by FEV. The measurement technology, software and equipment is provided by FEV Software and Testing Solutions (STS), a company of the FEV Group, which also sells test benches for cell and stack testing.

With its flexible modeling framework, FEV offers its partners an additional option that pays off: With the help of various simulation tools, any commonly used hardware components can be dispensed within the early development process, eliminating the need for costly hardware replacement. At the same time, simulation has a positive impact on development time, which also shortens time-to-market.