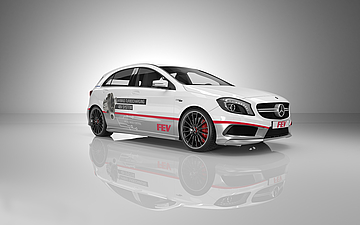 Test drive possibility: FEV engineers have installed an additional e-charger in the AMG A45 concept vehicle. The result: The maximum torque of 450 Nm is available earlier in the speed range at 1,600 rpm – 650 rpm earlier than in the series version (Source: FEV GmbH) 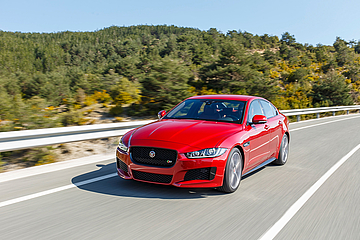 Available for test drives at Vienna Motor Symposium 2016: FEV will present the highly-efficient AJ20D4 Ingenium 2.0L diesel engine which is used in the new Jaguar XE and XF. FEV supported the development and integration of the engine (Source: Jaguar).

Aachen, 28 April, 2016 – The FEV Group will provide insight into what the road map for the integration of alternative drivetrain solutions might look like between now and 2025 at the 2016 Vienna Motor Symposium. FEV experts will focus not only on gradual approaches to electrification, but also on further optimization of conventional powertrain technologies with a view toward compliance with upcoming emissions legislation.

"Developers see themselves confronted with ever-increasing demands for comfort, stricter legal standards, shorter development times, and high cost pressure," explains Professor Stefan Pischinger, President and CEO of the FEV Group. "Our presence at the trade fair this year will provide a sampling of FEV's range of services, highlighting possible solutions, including technologies for gradual electrification — from micro-hybrids to purely electric vehicles — plus tried-and-tested tools for shorter and validated development processes."
Series-compatible Electrification

A highlight of FEV’s presence in Vienna will be a Mercedes A 45 AMG concept vehicle, into which FEV engineers have installed an additional 48V e-charger. The electronically operated unit supports the twin-scroll turbocharger, optimized for maximum performance at low speed and highly dynamic load changes. The maximum torque of 450 Nm is available quite early in the speed range at 1,600 rpm – 650 rpm earlier than in the production version. As a result, the elasticity and the responsiveness of the already very sporty AMG A45 increase considerably and the number of required gear changes is minimized. Test rides will be offered at the Vienna Motor Symposium, where participants can experience the driving behavior of the optimized vehicle.

Highly-Efficient Powertrain for the Jaguar XE and XF
FEV will present a highly-efficient diesel engine in the form of the JLR Ingenium (AJ20D4). The engine is used in the new Jaguar XE and XF models, which have extremely low CO2 outputs of only 99 g/km and 109 g/km, respectively. During the development of the Ingenium engine, FEV supported the development and optimization of the aftertreatment system and controls. FEV engineers also performed calibration work to improve drivability. This calibration makes use of a very “long” transmission, allowing the engine speed range, driving noise, emissions and, in particular, fuel consumption to be reduced.

Focus on Going from Road to Rig to Desktop
In addition to vehicle and powertrain technologies, FEV will show tools that reduce development time and shift significant development steps from the street to a test rig or even to simulation software. This includes FEV's TOPEXPERT, FEV’s central platform for a suite of application tools. Efficient test center management is especially important when the goal is combining different test facilities and test types together to simulate real driving conditions as accurately as possible. The targeted interaction of the FEVFLEX information management software with the FEV-automation systems and FEVALYS data analysis software provides an important contribution toward making these requirements manageable.