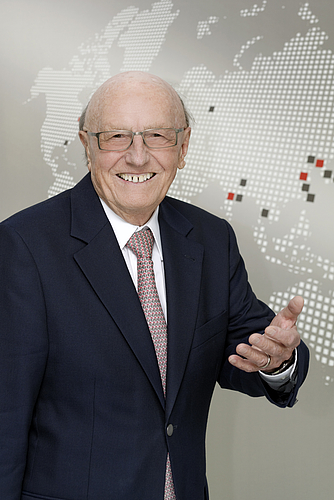 FEV founder Professor Dr. Franz Pischinger has been inducted into the Hall of Fame of German Research. (Source: Peter Winandy)

Professor Dr. techn. Dr. e.h. Franz Pischinger, founder of FEV GmbH and the retired Director of the Institute for Combustion Engines at the RWTH Aachen University has been inducted into the Hall of Fame of German Research. With this induction the German “manager magazine” has honored him for his substantial contribution to the purification of the exhaust gas from gasoline and diesel engines and, hence, reduction of pollutant emissions.

The official awards presentation took place on November 17, 2016 during an festive evening event in Wiesbaden, Germany. Approximately 100 guests from the fields of research, economics, and politics honored the scientist and developer whom experts refer to as the “engine pope.”

After receiving the 2015 Aachen Engineering Award recognizing his life’s work and continuous presence as a role model for aspiring scientists and developers, this induction into the Hall of Fame of German Research represents another important honor for Professor Pischinger. Several of the 20 laureates are Nobel Prize winners.