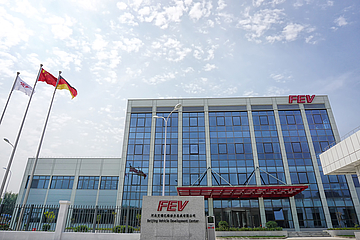 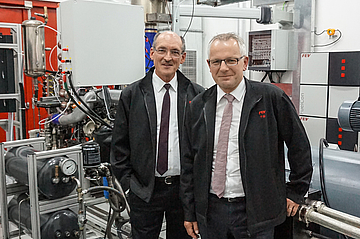 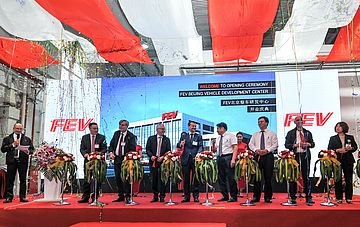 On June 28, 2016, the board of management of FEV officially opened the new FEV Beijing Vehicle and Powertrain Development Center. Representatives from politics and many customers were in attendance during the traditionally Chinese ceremony (Source: FEV GmbH).

On June 28, 2016, Professor Stefan Pischinger, president and CEO of the FEV Group officially opened the new FEV Beijing Vehicle and Powertrain Development Center. Han Zhanshan, a representative of the Chinese government, Adam Mutwil, the transport counselor at the German embassy in Beijing, and many customers were in attendance. In addition to the new site in Beijing, FEV is already well-represented in China with its test center in Dalian and a design office in Shanghai.

“A great day for the FEV,” said Dr. Ernst Scheid, executive vice president of FEV GmbH and chairman of the executive board of FEV Asia GmbH. “With our competent engineers, software specialists and advanced test facilities at the Beijing site, we are even better able to support our customers in Europe and China with their product development. The drive systems of the future will be created here: highly efficient engines and transmissions, electric motors, batteries and fuel cells. Clean air and high energy efficiency are the goals.”

“With the new building in China, we will – even more so than in the past – offer development services in more immediate proximity to our international and Chinese clients in accordance with all prevailing requirements and conditions,” explained Professor Stefan Pischinger during his opening speech. “With our modern and versatile networked test center, we are keeping pace with the latest trends and requirements in the field of development, which means increasingly transferring process steps from the road to the lab in order to save time and money on development.”

The new FEV development center is located close to the Beijing airport in one of the automotive centers of China. The cornerstones of the first phase of construction include 10,000 square meters of office space on a 30,000 square meter large plot, eight ultramodern test benches for conventional and electric drives, 150 office workplaces as well as an affiliated vehicle  application facility. Other expansion phases have been planned and will be implemented, as required, thanks to the use of functionally-organized basic structures as well as a modular design of the buildings and the central technical facilities.

Planning and Execution Following a Proven Pattern
While realizing the FEV Beijing Vehicle Development Center, FEV was able to draw on decades of experience in planning, implementation, and operation of advanced test centers. The new building was realized in less than twelve months under the direction of FEV’s turnkey experts who collaborated closely with local professionals and service providers.