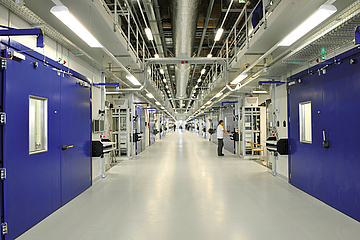 Vehicle propulsion systems have been thoroughly tested at the durability testing center (DLP – Dauerlaufprüfzentrum) in Brehna for ten years now. On June 9, 2017, FEV celebrated the anniversary of the test center along with customers, guests from government and business sectors, and the families of its employees (Source: FEV Group)

Vehicle propulsion systems have been thoroughly tested at the durability testing center (DLP – Dauerlaufprüfzentrum) in Brehna for ten years now. On June 9, 2017, FEV celebrated the anniversary of the test center at the 60,000 m2 site along with customers, guests from government and business sectors, and the families of its employees.

In his address, Dr. Jürgen Ude, State Secretary at the Ministry for Economy, Science and Digitalization in the Federal State of Saxony-Anhalt, specifically noted the importance of the DLP for Saxony-Anhalt as a business location: “It is a true asset for the region, as an employer and a highly innovative leader in cutting-edge technology. On the political side, we are focusing intensely on enhancing the innovative capacity of business in Saxony-Anhalt. FEV and the DLP are perfect examples of this, demonstrating the link between research and industrial innovation.”

Professor Stefan Pischinger, President and CEO of FEV Group, drew special attention to the exceptional work of all the employees, who have made this road to success possible for the durability testing center. “We do not anticipate that growth will stop anytime soon at the Brehna site. We are already planning additional stages of expansion targeted specifically at the demands for hybrid and electric mobility,” he promised.

The testing center in Brehna is one of the most modern and efficient facilities of its kind in the world. All 41 test rigs are used for testing of vehicle propulsion systems, and include an extensive testing program for validation and release prior to start of production. The DLP is operated by FEV, an engineering service provider with global operations. The technologies and testing systems used here were developed within FEV’s Software and Testing Solutions business unit in close collaboration with the various engineering areas.

Since opening in 2007, the DLP has already undergone two expansions in order to meet the demand of customers from around the world. The total investment volume since 2007 is about 75 million euros. All test rigs are monitored and operated from a central control room. This format is one of a kind and most notably, it allows an additional 20 test rigs in the FEV Group to be operated, as well. The DLP currently has 185 employees, more than 50 of which are university graduates.