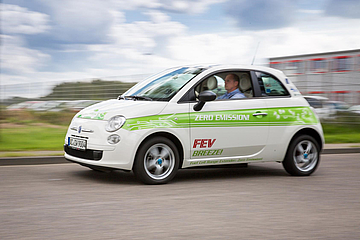 Aachen, July 1, 2019 – Last Friday, at a gas station in Aachen, the first hydrogen fuel pump was put into operation. For the official opening, the development service provider FEV, which works on forward-looking concepts in the field of fuel cell technology, was also present.

Thanks to RWTH Aachen University, the engineering service provider FEV, and other innovative automotive manufacturers, Aachen is now considered a competence center in Germany for the mobility of the future. Therefore, it’s logical that the region’s first hydrogen filling station is now operational.

"Even though battery-powered electric vehicles are currently considered to be the alternative to the conventional combustion engine, fuel cell drives offer many advantages," states Professor Stefan Pischinger, President & CEO of FEV Group GmbH. "On the one hand, such a vehicle does not emit any pollutants and keeps the air in cities clean, on the other hand, the refueling with hydrogen only takes a few minutes and provides a range of up to 700 kilometers."

This makes this drive form an interesting option especially for the transportation of goods by commercial vehicles or rail, since long distances must be covered. Fuel cell drives also do not require any compromises in terms of driving comfort. The driving behavior, the acceleration, and the acoustics match those of battery-powered electric vehicles. However, the high purchasing and operating costs of the vehicles, as well as the low number of hydrogen filling stations, have prevented market penetration to date.

For more than twenty years, FEV has been working on solutions to make the fuel cell a more efficient and practical drive alternative. To this end, the company uses special test benches to examine and optimize fuel cell systems worldwide with outputs of up to 200 kW. Environmental tests are also possible at the system and the vehicle level. Through many development projects for the design of fuel cell systems, vehicle benchmarks, and cost analyses, FEV works on making this drive technology usable for a broad range of target applications. In 2015 with the BREEZE! project, FEV showed via a demonstration vehicle that a fuel cell can be effectively utilized even in small vehicle types, such as the Fiat 500.