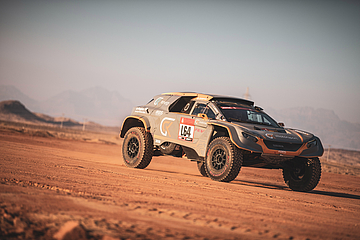 For decades the famed Dakar Rally has been dominated by highly modified entries with internal combustion engines. However, with its organizers pushing for a fully green roster by 2030, the legendary rally is now providing fertile ground for companies seeking to prove the performance of their electrified mobility solutions. In November 2020, GCK Motorsport announced their intent to go completely green with their cross-country efforts and unveiled their “e-Blast 1” off-road race car.

GCK Motorsport will become the first team to present a hydrogen-powered cross-country vehicle at Dakar 2022 before competing in the rally in 2023, thus supporting Dakar Rally organizer ASO in its desire to promote an environmentally sustainable event.

FEV will support the effort with its extensive design, development and integration expertise. The partnership seeks to produce an onboard fuel cell system with an output of 200 kW — one of the most powerful on the market. In addition, by virtue of being housed in a Dakar Rally race car, the system will be subjected to some of the most grueling conditions imaginable, testing the limits of FCEV capabilities. Fuel cell stacks will be provided by EKPO Fuel Cell Technologies, a joint venture between ElringKlinger and Plastic Omnium.

"We are delighted to have a leading partner in FEV to join us on this huge challenge,” said Eric Boudot, CEO of GCK. “This historic step in the life of our company perfectly illustrates our mission to develop technological solutions to meet the growing demand for the integration of green energy in the field of mobility."

"Thanks to more than 20 years of experience in the field of hydrogen related technologies, FEV is uniquely equipped to accept this challenge”, said Nadim Andraos, Executive Vice President for FEV in France, Spain and North Africa. “We are honoured to be part of GCK’s mission to conquer the prestigious Dakar Rally with a fuel cell powered vehicle, and share their vision for a carbon-neutral future. We will support GCK’s participation with all of our passion, expertise and infrastructure.”