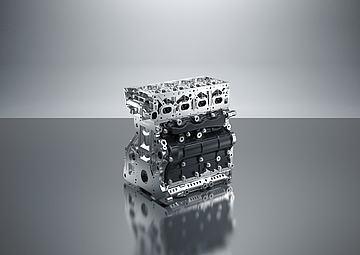 Aachen, December 2020 – Weight reduction remains a primary focus for vehicles to achieve lower CO2 emissions. FEV has collaborated with various partners on its LeiMot project (“Lightweight Engine”) to demonstrate how much potential internal combustion engines still offer. Major components of a baseline diesel-powered passenger car can be made roughly 21 percent lighter thanks to additive manufacturing methods. At the same time, the experts at FEV – an international leader and independent service provider for vehicle and powertrain development – were able to increase the efficiency of engine functions such as cooling and oil circulation.

With a view to future emission and driving dynamics requirements, the aim is to further reduce vehicle mass and increase powertrain efficiency. Modern all-aluminum combustion engines have already reached a very high level in this respect. Major leaps in development can probably only be accomplished with alternative manufacturing processes. FEV has now highlighted their potential in the LeiMot research project.

The focus was on the cylinder heads and crankcase of a state-of-the-art, mass-produced, two-liter diesel engine. Both parts were manufactured using a selective laser powder bed fusion (LPBF) process instead of die-cast aluminum as in the past. “This allows components to be fabricated through additive manufacturing. That is, one layer at a time based on material in powder form,” says Ralf Bey, LeiMot project manager at FEV. “In this specific instance, it was aluminum alloy AlSi10Mg, but we also considered fiber-reinforced plastics. The components produced using this method weigh around 21 percent less. At the same time, the new, installation-compatible engine parts – cylinder head and crankcase – increase the powertrain’s efficiency.”

Cylinder Head Loses Mass but Retains Durability
The newly designed cylinder head alone saves 2.3 kilograms, or 22 percent of the weight compared to the original component. To accomplish that, engineers needed to reinforce certain areas, especially those subjected to high mechanical stress, because the combustion process primarily exerts bending loads, while the engine as a whole is subjected to torsional loads. The best ratio of weight reduction to rigidity is a combination of an I-beam (IPB) and an integrated, closed drawer.

“Thanks to additive manufacturing, we were able to produce the exhaust port with heat insulation, built in using a 3-D printer,” states Bey. “That not only heats up the exhaust after-treatment systems faster, but it also boosts the turbine inlet temperature, making the turbocharger more efficient.”

Crankcase reinvented
When considering the aspects of weight and rigidity of the crankcase, the decision was made to go with what is called a short-skirt design with a bedplate of aluminum. Replacing the steel bearing caps with the bedplate was made possible by the reduced friction main bearing diameters of the diesel base engine. With the redesigned crankcase, including the bedplate, the weight was lowered by 5.1 kilograms compared to the original components.

The bulkheads of the crankcase were given open, horizontal load structures reinforced by a cross-rib network in appropriate places. Additional strength is provided by two low-weight connecting tubes in the area of the balance shafts. Based on topology analyses, low-stress zones were optimized with lattice structures and hollow spaces.

Less Water Allows More Cooling
The new cross-current cooling system enables the cylinders’ temperatures to be lowered, while at the same time reducing the amount of water needed. One main difference in design is the individual cooling channels in the cylinder head, which replace the large-volume cooling jacket. They decrease the temperatures in the combustion chamber plate by as much as 40 percent. Despite using 40 percent less coolant, the temperatures of the walls were reduced significantly compared to the reference engine. As a result, both the warm-up phase after a cold start was shortened, and the power needed to run the water pump was lowered.

Advancements in Oil Circulation Reduce Pressure Loss
Advancements in oil circulation lead to additional advantages during cold starts and in normal operation. The measures aimed at optimization also include a new approach to route the related hoses, with gentle curves instead of sharp redirection, and changes in diameters. Altogether, the approach reduced the amount of pressure loss in the cylinder head and crankcase by 22 percent. A reversed siphon prevents oil from running off when standing still. This keeps the appropriate oil pressure for operating the valves available more quickly once the engine is started. Hollowed bulkheads provide for return oil circulation.

“Additive” Teamwork
Germany’s Federal Ministry for Economy and Energy is funding the LeiMot research project. FEV is leading the dedicated consortium consisting of a renowned automobile manufacturer, research institutions, universities of applied sciences, development service providers, equipment manufacturers, and automotive suppliers. Their common goal is to enable even conventional production methods to benefit increasingly from the opportunities afforded by additive manufacturing – far beyond the example of the engine described.