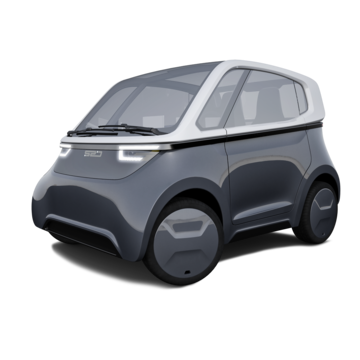 Aachen, October 2018 – International engineering services provider, FEV, is presenting solutions for the mobility of tomorrow at this year’s Aachen Colloquium Automobile and Engine Technology (ACK). Appearing as an example of FEV’s expertise in global vehicle development, one of the vehicles in the spotlight will be SVEN, designed to meet the needs of urban car sharing. Compact and powered only by electricity, SVEN should appeal to a wide audience with its intuitive operability.

The 27th ACK, now Europe’s largest convention for automobile and engine technology, will take place in Aachen on October 8–10. In addition to its diverse contributions to the lecture program, FEV, which is headquartered in Aachen, will also
be represented in the accompanying technical exhibition.

Urban Mobility Concept SVEN
Increasing congestion, air pollution, and parking shortages go hand in hand with increasing urbanization. The vehicle and mobility concept, SVEN, is based on cooperative research between the Aachen University of Applied Sciences, share2drive, and FEV. As an emissions-free, purely electric-driven car sharing solution, SVEN should close the gap between personal and public transportation.

Only 2.5 meters in length, the three-seater vehicle is extremely compact. This enables it to park diagonally, meaning it will fit into practically any parking space. At the same time, the vehicle fulfills the highest safety standards in the event of a crash due to its applied Flexbody. Emphasis was also placed on simplicity of operation: only eight buttons are needed for the intuitive operation of the vehicle.
In addition, the user will have the opportunity to customize the vehicle to a large degree. With the help of an MLA projector, information, such as the current charge status of the vehicle, can be projected on the floor. A SVEN design model will demonstrate this capability at the FEV stand.

“With SVEN, we hope to demonstrate our expertise in full vehicle development and apply it to various areas, such as the car body, interior, chassis, and powertrain. In doing so, we can comprehensively support our clients during all the relevant aspects, from conception to simulation all the way up to serial production,” says Stefan Pischinger, President & CEO of FEV Group.

It was only in June of this year that FEV’s spectrum of services in global vehicle development was further strengthened by the acquisition of the vehicle developer B&W.

Modern Powertrain Solutions
At the ACK, FEV will also present the “HONDA 1.0l VTEC Turbo,” based on a 1-liter, 3-cylinder Otto-DI engine that was created as part of a customer order – the product of successful serial development. Through the cooperation with HONDA R&D Co. Ltd., FEV was able to prove its series expertise from concept all the way up to series release. During this time, they fulfilled all of HONDA’s strict requirements and were able to successfully implement these requirements in the current HONDA CIVIC.

The new, 1-liter Otto engine is the product of notions of downsizing, which led to the engine being made smaller but more efficient. The result is a more powerful and, at the same time, much more economical gasoline engine with a maximum torque of 200 Nm that meets today’s strict emissions requirements in the target markets in China and Europe.

E-Drives for different applications
Both for purely electric vehicles and for plug-in hybrid vehicles, the demands for more driving performance with an increase in range are growing. These specifications were in focus of FEV when developing a modular electric drive unit. The electric machine is arranged axially parallel, whereby there are many degrees of freedom in terms of transmission ratio. The top-of-the-line variant is a fully load-shift two-speed drive unit based on a dual-brake planetary gearset that covers a maximum electric machine torque of up to 600 Nm. The two-speed system ensures a particularly efficient operation, which is reflected in a greater range, especially at higher vehicle speeds. In addition, the two-speed version supports both recuperation and a neutral position for sailing operation. The modular system is easily scalable and thus offers high flexibility for different vehicles and individual customer requirements.

Besides that, FEV exemplary presents a purely electric 48 V axle, which creates new application possibilities for the 48 V technology currently used mainly in cars. The axle was conceptualized for use in light-duty municipal utility vehicles – for example, road sweepers or small dump trucks – in order to reduce the city’s emissions to zero. At the same time, FEV’s concept is designed for use on components available from the market in order to offer a solution that is as cost efficient and quickly accessible as possible. In addition, the axle can be configured in a number of ways – for example, with one or two electric engines, various transmission ratios, and also optionally with wheel brakes. The alternator that is integrated into the electric engine fulfills ASIL B. In total, the unit (with two electric engines) delivers a maximum axle torque of 1,500 Nm.

Convenient and Efficient: FEV’s 7-Speed Dual Clutch Transmission
The 7DCT330 developed by FEV is a modern, 7-speed dual clutch transmission for transverse mounting. It fulfills the highest standards of shift quality and efficiency while also weighing very little. It is also flexible and can be used on a variety of combustion engines and vehicle platforms. During development, emphasis was placed on achieving as much modularity as possible so that the hybrid variants also available could be manufactured on the same assembly lines as conventional transmissions.

Engine from the Printer
In addition, FEV will present the opportunities resulting from 3D-printing technology of cylinder heads at its stand. With this technology, production is possible without tools, which can greatly improve manufacturing time. However, the technology offers even more benefits, such as great flexibility which allows design changes to be easily incorporated into the manufacturing process. FEV offers their expertise and the complete control of the production process including the final engine test.

Saving time through Virtual Calibration
The virtual calibration platform, vCAP, is a highly efficient, simulation-based calibration platform that shifts a significant portion – up to 50% – of the demanding ECU calibration according to the WLTC, WHTC, and RDE standards to virtual XiL test benches. This significantly reduces the number of real engine and vehicle tests under a variety of conditions, such as temperature or altitude, and thus reduces development time. The particular advantage of vCAP is the special collaborative environment which enables the test teams to share and work on the same models, instruments, and variable configurations. The model accuracy remains identical from the MiL phase until validation at the test bench. Applications of vCAP include, among others, the partial and full load calibration under normal and extreme conditions (RDE), after treatment calibration, OBD calibration, ECU software or even the aging test.

Visit FEV at the ACK and learn more about the most recent developments:
Eurogress Aachen, ground floor, stand 04