FEV France Selected as Part of the "France Relance" Plan 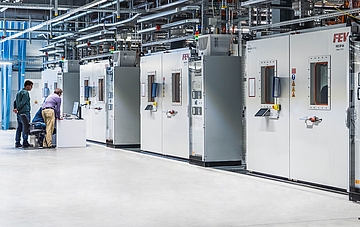 FEV France’s new test facility will enable up to two battery packs to be tested at the same time under extreme environmental conditions ranging from -40 to 70 °C. Source: FEV Group

Trappes, France, March 2021 - FEV France is one of the eight winners of the automotive sector selected as part of the "France Relance" plan initiated by the French government. The objective of this €100 billion plan in total is to support investments of leading companies through dedicated funds to drive the transformation of the automotive and aerospace sectors. In addition, the preservation of know-how and skills around ecology, competitiveness and cohesion will be promoted. As part of this plan, FEV developed an investment project in test bench equipment, enabling the company to pursue its activities regarding the electrification of the mobility sector and adjacent markets.

The transformation of the automotive sector towards zero CO2
mobility is recognized as one of the main challenges in the industry and includes the electrification of future vehicles. FEV France has more than eight years of experience in the field of high-voltage battery testing for BEVs and has been ISO14001 certified.

“Already in 2019, we had invested in a new building at our technical center and head office in Saint-Quentin-en-Yvelines, to increase our battery testing capacity”, said Nadim Andraos, Executive Vice President for FEV in France, Spain and North Africa. “To be able to address today’s ever growing demand in the area of high-voltage battery testing, FEV France’s facilities will now be further expanded in the framework of the ‘France Relance’ plan. The total area of the battery testing facility will cover 600m².”

FEV France’s new test facility will enable up to two battery packs to be tested at the same time under extreme environmental conditions ranging from -40 to 70 °C and will complement the already existing climatic test facilities (-30 to 70 °C). Innovations of the new facility will include the possibility to interrupt a running test. This allows for technicians to perform examinations or implement changes to the setup without having to completely shut down the test. It can be simply restarted at the point of interruption.

FEV France will carry out electrical characterization tests on different battery pack charge levels. These functional tests at the beginning of a development cycle help to determine the pack’s design and support the calibration of the battery management system (BMS). An identical procedure at the end of the development cycle is performed for validation purposes before the market launch.

The start-up for future customer projects is expected to be around mid-December 2021. It will include the possibility to also serve adjacent markets, which seek to electrify their powertrains.

Construction and operation of the new test facility will enable FEV to create around 15 workplaces in direct or indirect positions in France, covering technical, commercial and managerial tasks. In addition, the project will involve various material suppliers and will therefore have a positive impact on employment for these subcontractors as well.

About FEV France
With more than 750 employees in France, FEV provides engineering expertise, services and equipment for the development of innovative powertrains, whether thermal, hybrid or electric. We offer cutting-edge solutions that are increasingly respectful of the environment, with a high level of requirements in terms of quality, timeliness, safety, performance and reliability. FEV is also the preferred partner of major players in the French transport industry: manufacturers, equipment suppliers, test laboratories, schools and universities.