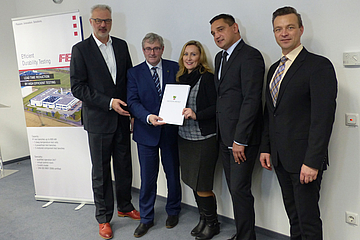 Sandersorf-Brehna, January 23, 2018 – The FEV Group is continuing its expansion of the durability test center (Dauerlaufprüfzentrum - DLP) in Brehna (Saxony-Anhalt). With the fourth expansion since its opening in 2007, the DLP capabilities now include seven test rigs designed for electric drives. Including the planned addition of a logistics hall to the facility, the overall investment volume amounts to more than 13 million Euros. Upon conclusion of the latest expansion, a total of more than 90 million Euros will have already been invested in this location. To mark the official award of the state grant in the amount of 1.9 million Euros, a welcome reception was organized on January 22 for the Secretary of the Ministry of Science and Economy of the State of Saxony-Anhalt, Dr. Jürgen Ude.

"The FEV durability test center in Brehna is one of the most modern of its kind worldwide and has achieved impressive growth at this location. I am very pleased about this development, which shows that investment in research and innovation in the automotive location Saxony-Anhalt pays off – for all involved," emphasizes Dr. Ude.

Asked about the motivation for expanding this location in particular, Professor Stefan Pischinger, President and CEO of the FEV Group, adds: "With the expansion of the durability test center, we are taking into account the growing demand for electrified powertrains. In view of the excellent conditions for our company in Brehna, the decision to take this step was therefore made quickly."

This constant growth is also accompanied by a positive development in the number of employees, as confirmed by the Managing Directors of the DLP Brehna, Steffen Kunz and Hans-Dieter Sonntag: "When we started in 2007, we had just under 80 employees. In the meantime, we have been able to increase this number by around 150 percent, to over 200." And there is no end in sight: "After this expansion, we will be operating a total of 48 test rigs in this region. Therefore, we will still be seeking specialized auto and electronics employees in the future," both emphasize.

In order to further strengthen research and development in Saxony-Anhalt, FEV - as an important employer for the region - joined the MAHREG Automotive Cluster – a network that increases value creation by bundling services from local automotive suppliers and promoting development partnerships. In addition, the FEV maintains various partnerships with universities in Saxony-Anhalt. As an example, FEV and the Otto-von-Guericke University in Magdeburg are jointly planning to open the "Center for Method Development" – a project that is also supported by the State. The cooperation is supported by the Investment and Marketing Corporation Saxony-Anhalt (IMG).