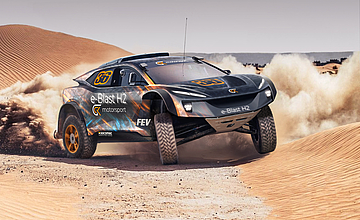 FEV showcased a variety of sustainable transportation technologies at HyVolution in Paris – including one of the most powerful fuel cell powertrains currently available, which will be used in GCK's “e-Blast H2” at the Rallye Dakar. Source: GCK

Paris/Aachen, May 2022 – FEV, a globally leading provider of consulting, engineering, development and testing services for sustainable mobility and clean energy markets, presented a multitude of sustainable transportation technologies at the prominent HyVolution trade fair, May 11-12. Joined by 200 key operators from across the hydrogen sector, the exhibit demonstrated how FEV’s spirit of innovation continues to break new ground and provide benefits throughout the hydrogen value chain.

Borrowing heavily from its portfolio of motorsport projects, FEV, a member of the France Hydrogène, showcased solutions in two critical areas for hydrogen-powered mobility: embedded fuel cell systems and hydrogen internal combustion engines. Featuring motorsport-related examples from both realms, the company made an undeniable statement about its experience in hydrogen technology and subsequent ability to provide high-quality partner-driven solutions to meet the most demanding hydrogen related needs.

FEV en Route to Dakar
Internationally recognized as one of the most gruelling events in all of motorsports, the famous Dakar Rally regularly pushes even the most mature transportation technologies to their absolute limits. By collaborating with two prominent names in the motorsports world, FEV along with its partners, is setting the stage for hydrogen technology breakthroughs in 2024.

H2 Combustion Engine Collaboration with ORECA
The two-phase effort with race technology legend, ORECA Magny-Cours, aims to set new standards in unlocking hydrogen’s power potential, contributing to Dakar’s own “Dakar Future” clean energy transition goals, as well as more broadly applicable hydrogen-powered zero-emissions internal combustion engine solutions. The first phase of the project, already in progress, focuses on the extensive technical requirements and simulation, and is being managed entirely by FEV. The second phase, dedicated to the design, production, and prototype testing of the engine, will be managed by ORECA Magny-Cours, and will use the company’s own dedicated test benches.

The partners have committed to having variants available and ready to tackle Dakar's extreme challenges when the competition starts in 2024.

Fuel Cell Collaboration with Green Corp Konnection (GCK)
The partnership between FEV and Green Corp Konnection (GCK) is aimed at designing, developing, and integrating one of the most powerful embedded fuel cell powertrains on the market — a 200 kW unit — which will propel GCK’s flagship off-road vehicle through the Dakar Rally in 2024 before being commercialized and deployed for use in industrial applications. A demonstrator was presented at the Dakar in January of this year.

Other Innovative Fuel Cell Solutions
As an extension of its fuel cell energy production technology, FEV has also developed innovations that apply throughout the remaining propulsion system architecture, including batteries, power electronics, and electric drive units (EDU). Its scalable solutions meet safety, energy density, and cost requirements to suit various needs, all of which are decisive factors for market acceptance regardless of application.

A Proven Leader in Zero CO2 Mobility
As these various projects demonstrate, FEV is a leader in fuel cell and hydrogen engine technologies, as well as other forms of propulsion system development. Solutions are available for the automotive, bus, truck, off-road, marine, rail and aerospace markets. FEV is involved in the entire process, from defining the concept through to vehicle integration and production. The teams’ skills include consulting, product development, prototype assembly, testing, and serial production. Each year the company invests heavily in R&D, technological demonstrators, and benchmarking.

FEV France is investing thanks to the France Relance Plan
As part of the France Relance plan, FEV France has invested in hydrogen technologies for its Saint-Etienne-du-Rouvray site (in Seine-Maritime). This includes constructing a test bench dedicated to system tests on fuel cells of up to 200 kW and modifying two traditional engine test benches to make them compatible for tests on combustion engines using hydrogen as fuel. FEV France was one of the automotive sector winners selected for this project, which was launched by the French government. Its objective is to help leading companies invest using dedicated funds, to accelerate the automotive and aeronautics sectors’ modernization, and to protect expertise and skills linked to ecology, competitiveness, and cohesion.