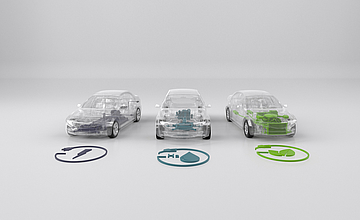 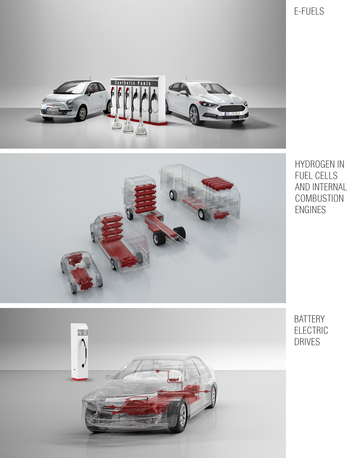 Aachen, Germany, December 2020. A sustainable mobility strategy should rely on three pillars of drive solutions in order to achieve the CO2 targets of the Paris climate protection agreement for 2050: battery electric drives, hydrogen in fuel cells and internal combustion engines, and e-fuels, especially for existing fleets in the coming decades. FEV, a leading independent international service provider of vehicle and powertrain development, advocated this approach at its conference "Zero CO2 Mobility" in November. However, the important pillar of e-fuels in combustion engines so far remains sidelined politically.

“Battery electric drives are considered to have a high impact in terms of achieving the Paris climate targets”, said Dr. Norbert Alt, COO, FEV Group in his welcoming speech at the company's digital "Zero CO2 Mobility” conference 2020. “Within a period of four years the availability of battery electric vehicles has increased significantly. Hence, vehicle manufacturers contribute to e-mobility and launch a variety of corresponding models on the market.”

At the same time, numerous efforts are concentrating on the charging infrastructure, which is currently still considered a limiting factor, especially in cities and urban agglomerations. As an answer to the question whether a charging process needs to be completed as quickly as a visit to the filling station, Dr. Alt cited the pyramid-shaped charging concept of an energy supplier. It distinguishes between stop-to-charge (rapid charging stations from 50 kW) as peak demand, park-to-charge (3.7 to 11 kW) in the middle of the range and finally charging-at-home/-at-work (from 2.3 kW) as an important contribution to charging electric vehicles. On average, vehicles in for instance Germany park for more than 23 hours a day - so "charge as fast as necessary" has to come before "charge as fast as possible". It can be assumed that the issue of "inner-city charging infrastructure" will be solved in Europe by 2030 at the latest.

The second pillar on the road to success in achieving the CO2 targets is already the current state of development of fuel cells using regenerative hydrogen. However, to make production quantities and thus costs more attractive, fuel cells should not only be used in heavy duty applications, but also to a large extent in passenger cars. Automakers are already making H2 fuel cell vehicles available today, and volume models for private transport are expected to be available from 2030.

Additionally, the use of hydrogen in internal combustion engines is essential, since they only produce minimal nitrogen oxide and CO2 emissions. “The hydrogen internal combustion engine can be brought to market much faster and therefore represents a bridging technology for CO2-neutral driving with hydrogen”, said Dr. Alt. “The task for industry and politics is now, to further accelerate and promote the broad availability of hydrogen-powered vehicles.”

The third component for climate-neutral mobility in the future - which has not yet been taken into account in the EU policy - is the significantly increased use of e-fuels in combustion engines. In this context, Dr. Alt emphasized the essential effect of backwards compatibility: “E-fuels can be used in existing fleets over the next decades and therefore make an indispensable contribution to achieving the climate targets. This is supported by a look at the statistics: in 2019, for example, over 50 percent of vehicles in Europe were more than eleven years old. The current global stock of passenger cars and light commercial vehicles amounts to approximately 1.3 billion.”

Against this background, Dr. Alt raised the question of appropriate EU regulations regarding e-fuels on the one hand and emissions on the other. FEV as well as representatives of the European automotive industry, including the VDA (German Association of the Automotive Industry), criticize the current proposals of the EU7 Commission. “Unfortunately, these EU7 proposals did not take sufficient account of the assessments of the technical experts. The current proposal cannot be implemented, especially not the requirement of extremely low emission values under all boundary conditions, such as short distance and cold operation”, said Dr. Alt. “It remains to be hoped that the EU will develop a new proposal with the involvement of experts, which in the end is technically feasible. In addition, experts question whether this next step from EU6d to EU7 will have a significant effect on real air quality. Laws for e-fuel quotas for CO2 reduction would be much more effective for climate and environment.”